HISTORICAL INFORMATION OF THE TOWN OF PONTE D’ARBIA 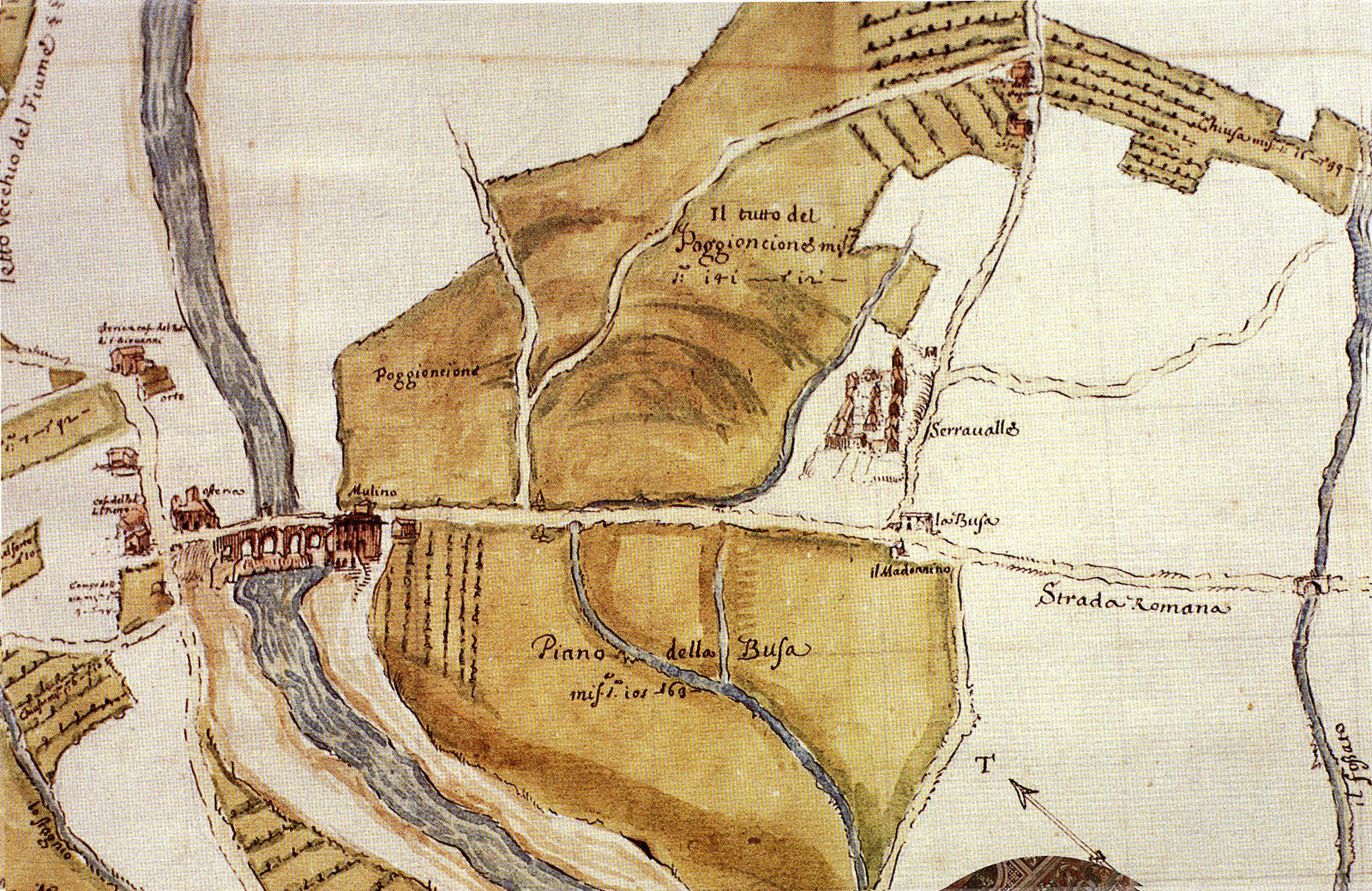 "Borgo d'Arbia and the surrounding area in the year 1644, State Archives of Florence, Convents suppressed 132, n.184"

The ancient town of Ponte d'Arbia, named until the end of the 1700s "Borgo d'Arbia", has been known since 994 when it was named in the travel notes by Archbishop of Canterbury, Sigeric, while he was travelling through Via Francigena on his return journey from Rome.

Several medieval testimonies show that in Borgo d'Arbia there were a church dedicated to St. Pietro (with a rector remembered from 1272 to 1341) and two hospices, one near the bridge and the other one on the hills (Sorbitella al Poggio or Silvitella).

In a map of Ponte d'Arbia's territory of 1644, there are two inns (San Giovanni's Osteria and Corona's Osteria), but the church has disappeared and St. Pietro's name has passed from the sacred building to the "farm house of S.Pietro" inside the village. 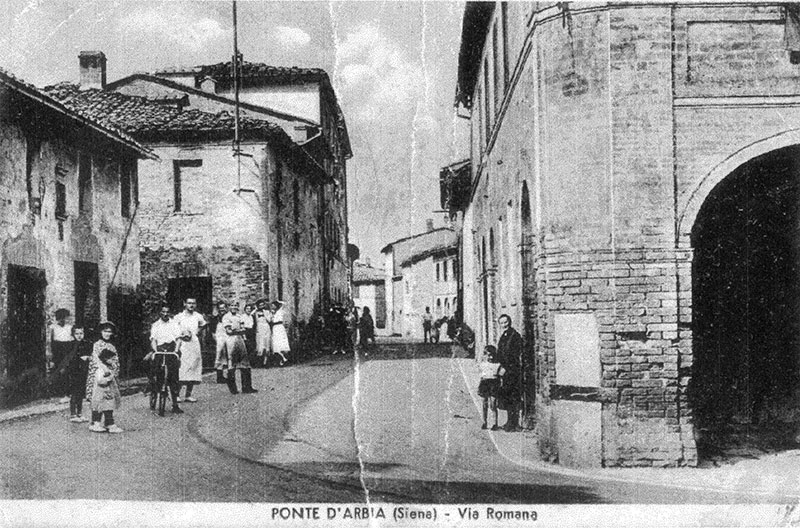 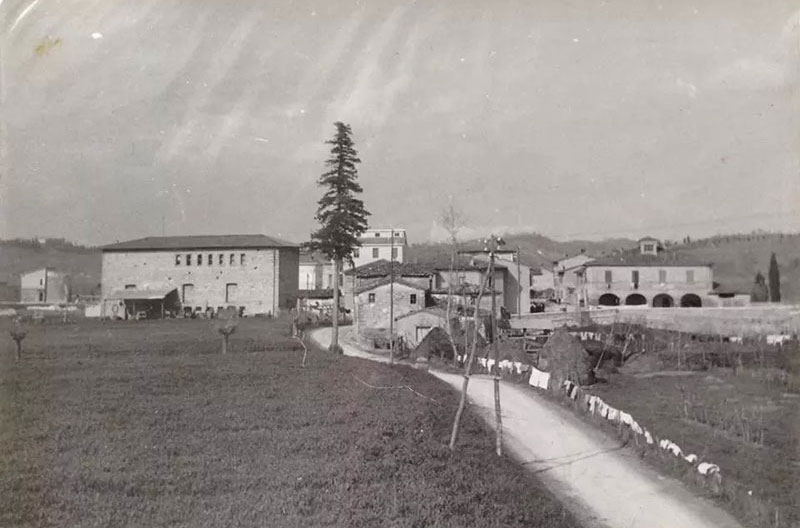 Today, Ponte d’Arbia does not have the oldest appearance, because it has been almost completely rebuilt after the destruction of airborne bombings during World War II. On Sunday of 10 June 1944, 18 French B26 bombers targeted the bridge with two distinct actions: the small village was almost sunk to the ground, but the operation report specified that the goal (the bridge) had only been damaged.

In 1946, the reconstruction works began, starting with the doubling of the bridge road, altering the Cassia trail (the so-called "variant") and the construction of the two complexes of popular houses in the village.

THE BRIDGE OVER THE ARBIA 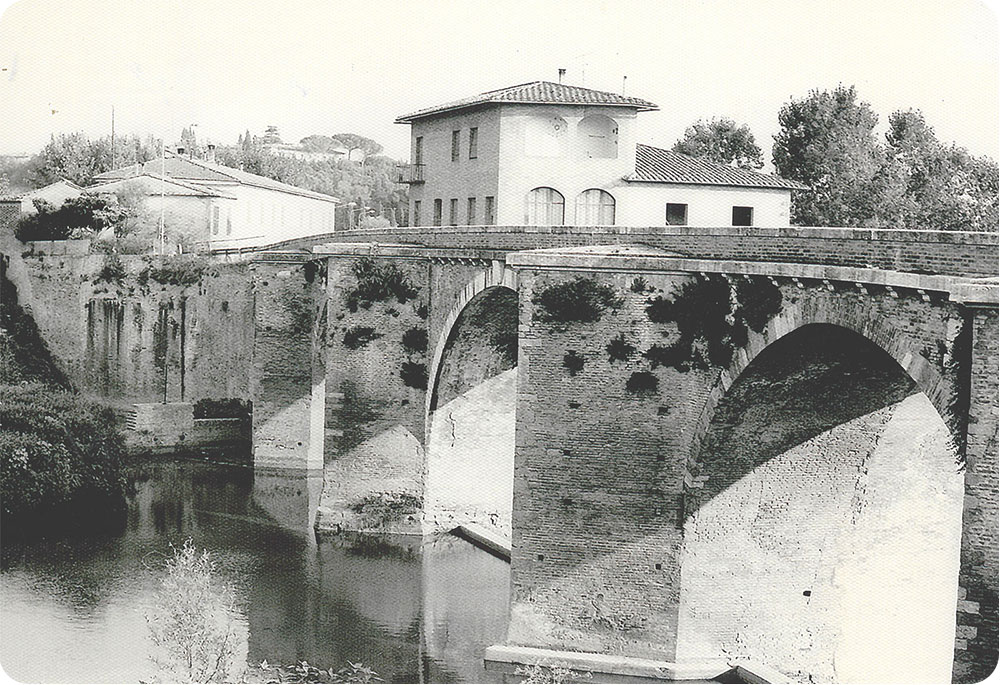 The bridge over the Arbia is described as a magnificent bridge supported by five arches, a feature that still preserves today.

Borgo d'Arbia developed around it and it was the ancient denomination of the small town, consisting of several buildings and houses, with two inns and a mill.

Since the place is located on the road to Rome, many travellers stopped for refreshment and after enjoying a comfortable home they went on their way. (Pecci, 18th century, part X, page 229)

As historian Emanuele Repetti writes: "The Bridge of Arbia was built by the Commune of Siena in 1388, and rebuilt in 1656 under Prince Mattias de' Medici, governor of that city, who ordinarily ordered the construction of the bridge over the Asso and that one on the Ombrone in front of Buonconvento, as it appears from the inscriptions still existing in their parapets." (Repetti, 1835, IV, pp.535-526) 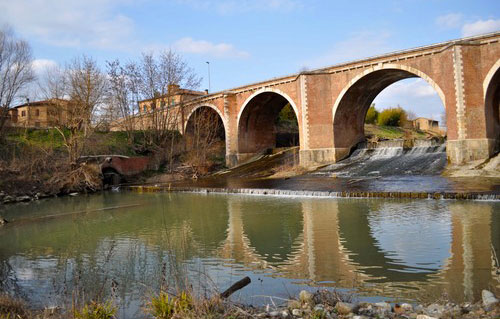 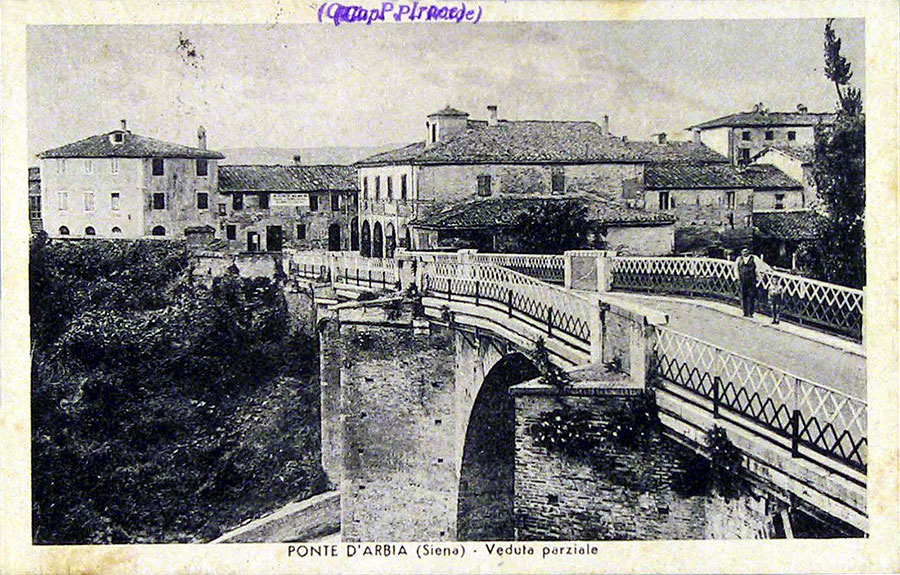 In December 1967, the parish priest summoned "the heads of family's meeting" and the "new church building Committee" was formed.

Don Dino Fabiani matured the idea of the shape of the roof from the natural observation of a shell attached to the rock: the patella.

The Church was dedicated to the Holy Family, on the advice of a parishioner, and was completed and solemnly inaugurated on September 6, 1970. 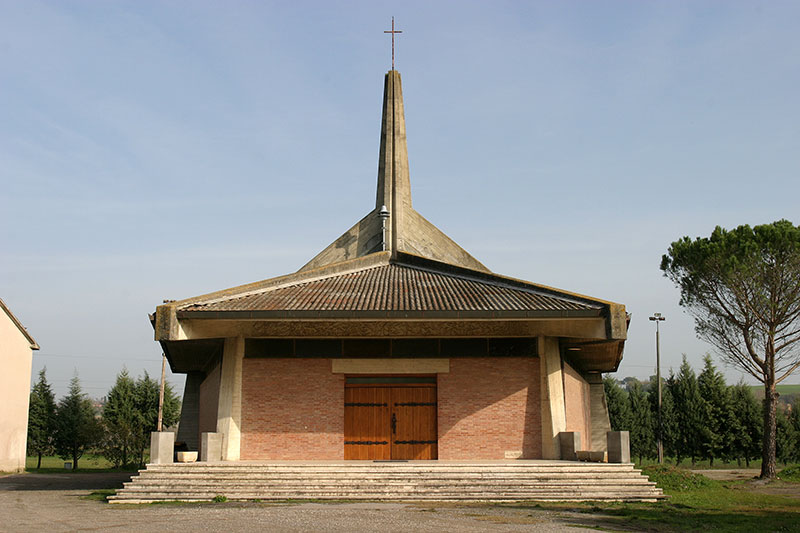 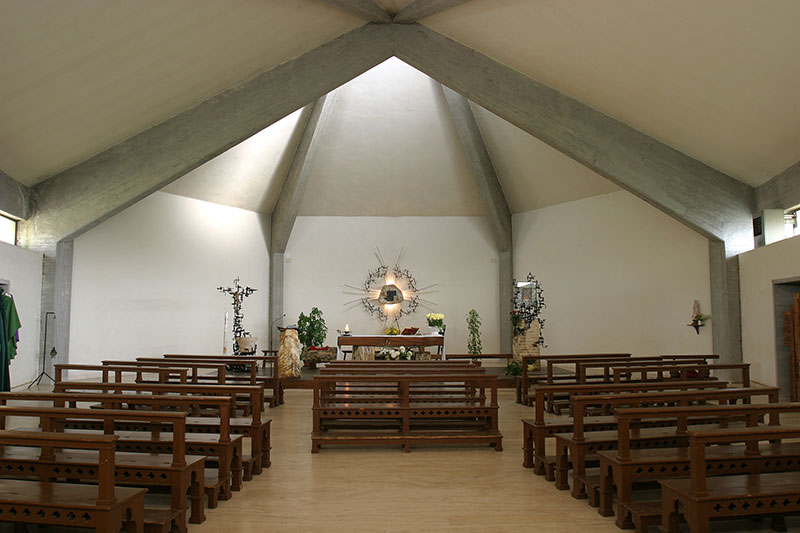 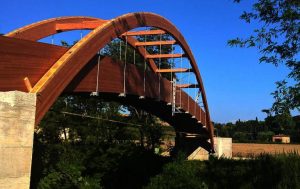 The catwalk, the only structure of this nature made in Tuscany, is entirely made of wood and steel and measures 40 meters with a pedestrian breadth of two and a half meters, projected by the Lastri Associati Studio in Siena. It was inaugurated on July 21, 2016.

The year 1840, on the facade, means certainly the date of execution of the renovation works undertaken by the Cresti family.

At the beginning of the 1900s, the ground floor rooms were place of "workshops": shoemakers, carpenters, grocery stores and fabrics, an olive grove for flaxseed oil production, and even an outpatient pharmacy. 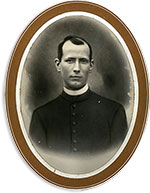 In 1930 Monsignor Lorenzo Cresti founded the kindergarten in which they served, until 1972, Carmelite Sisters and then Sisters of Charity of St. Vincent.

In 1978 it became a place for the reception of Cambodian and Vietnamese refugees.

Since 1983 it has been the seat of the cultural center "Mons. L. Cresti "and pilgrim's hostel on the Via Francigena. The property ownership is the Società di Esecutori di Pie Disposizioni onlus, based in Siena.
In 2016, the pilgrims testimonies welcomed in these years have been collected in the book "La chiave sotto lo zerbino" by Marco Padrini and Linda Monaci. 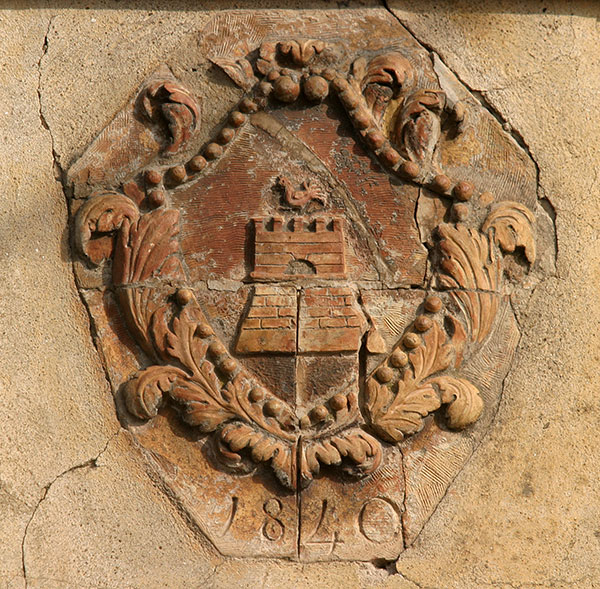 The chapel was probably built at the end of the eighteenth century, as evidenced by the Pope's Pius VI plenary, dated February 7, 1799.

The current architectural conformation dates back to an extension of the project, completed in 1850 by the architect Lorenzo Doveri and commissioned by of Luigi Cresti. 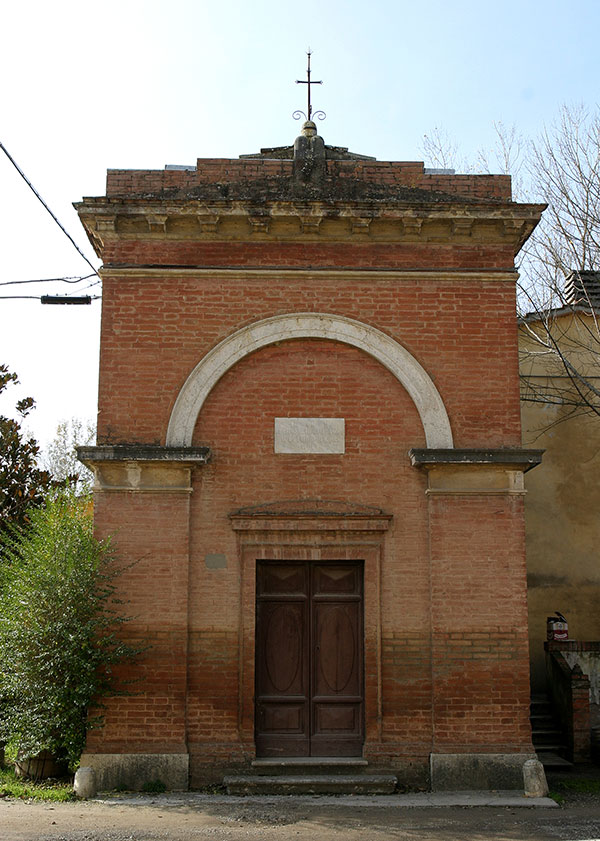 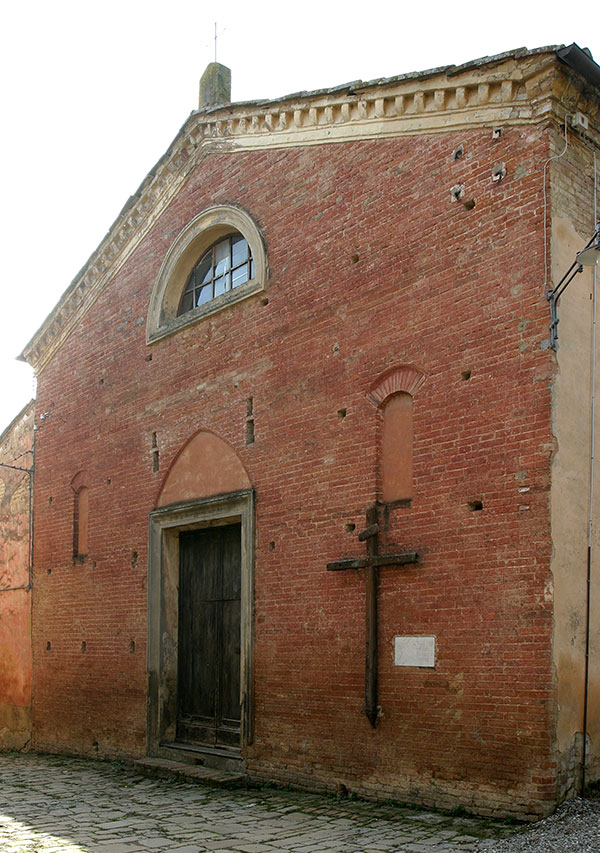 The name is born, as Merlotti (1881, c.615v) states, from the position of the ancient village, "because of its position in the hills that end between the two rivers, the Arbia and the Ombrone, it closes, or clamps, the valleys around, where these two rivers gather in the plain of Buonconvento."

Enclosed within the walls built by the Senate for its own security from 1371, the small village was plundered and partly destroyed in 1554-55.

The seventeenth century church in the ancient Serravalle castle was dedicated to the Saints Fabiano and Sebastiano.

In 1786, the title of St. Lorenzo was assigned to the church, transferred from the ancient Pieve to Sprenna. 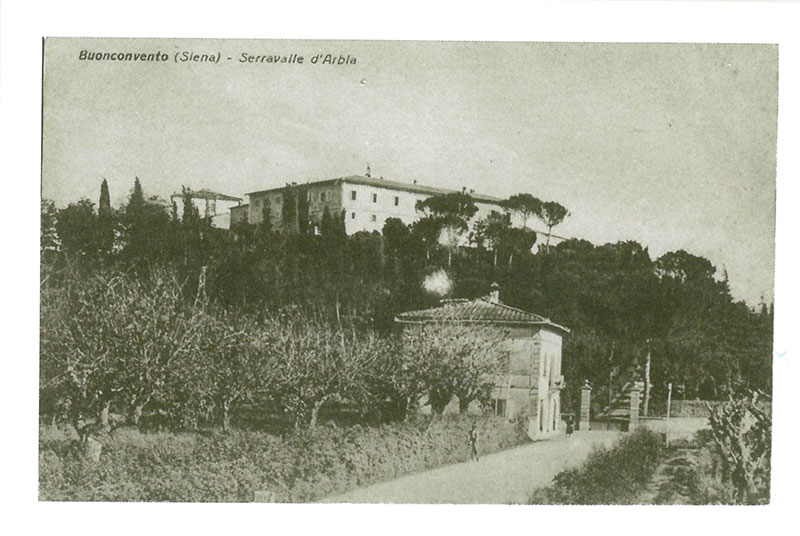 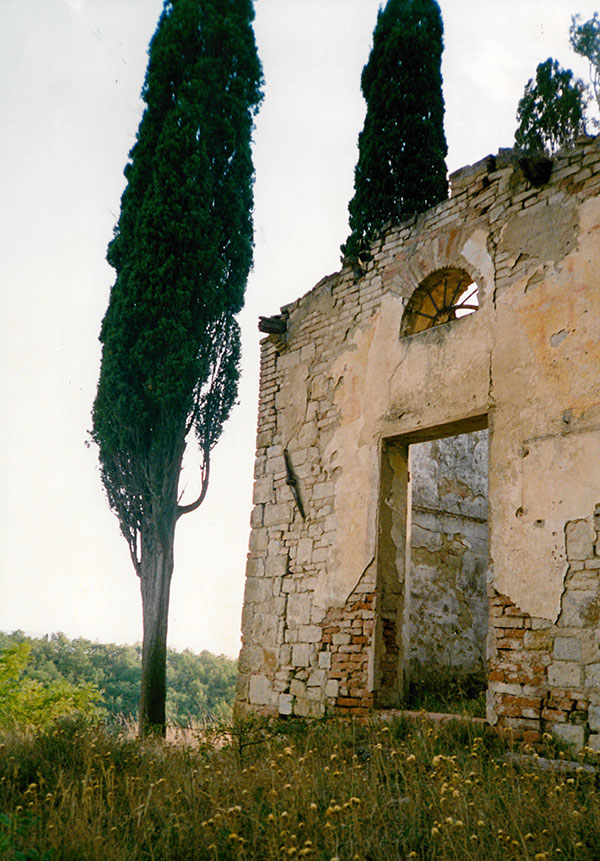 Toponym that since about three centuries has cancelled and made disappeared the one of San Giovanni a Pomeggiano, dating back to the Middle Ages.

The first memory of this seems to date back to 1246.

The church of S. Lucia, that still exists (even in the state of ruin), at the end of the 1950s was still open to worship. 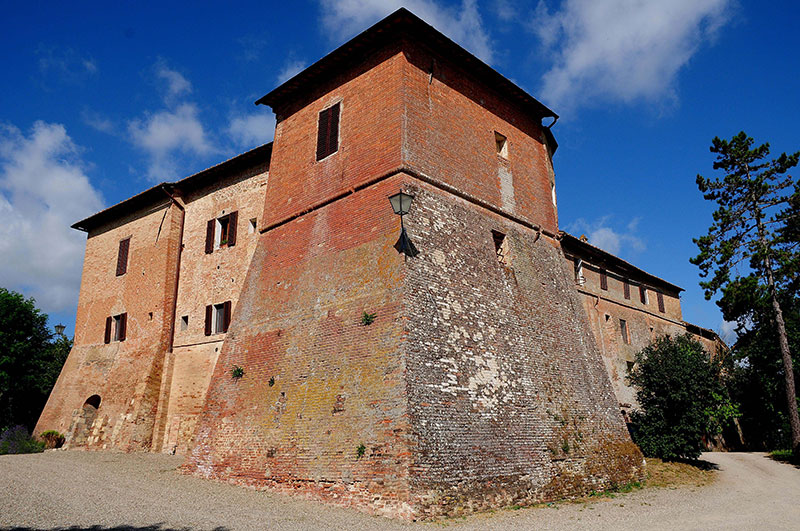 Saltemnano Castle was certainly the place of an important domination since 1055.

In July 1554 he was occupied for a few days by imperial troops.

Within the castle there is no trace of the existence of a church; however, there is a large building called "Chiesa" on the top of a hill. 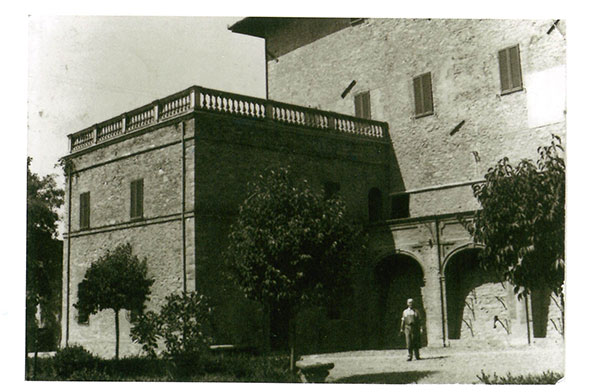 In 1314 the villa belonged to Giovanni di Tese Tolomei, who was also rector of Spedale di Siena. The villa remained a grange of the Spedale of Siena until 1504. 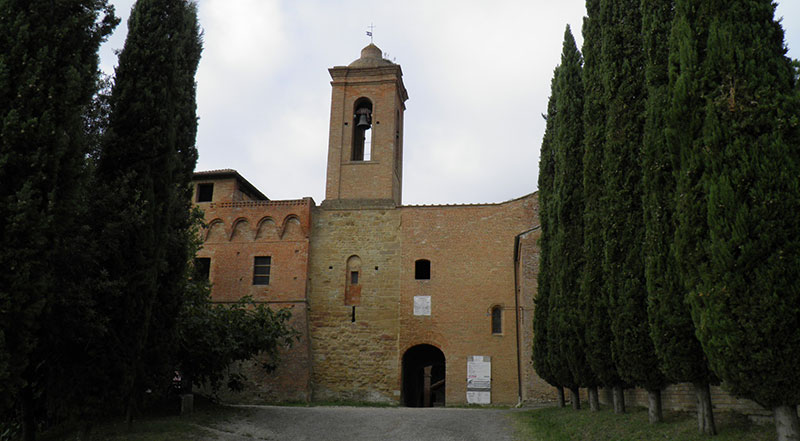 Among the historians, Maroni believes that the origin of the Pieve dates back to the VII-VIII century (Maroni, 1973, p.218).
From the 13th century, in the Pieve were assembled several canons , as evidenced by a document of 1252. 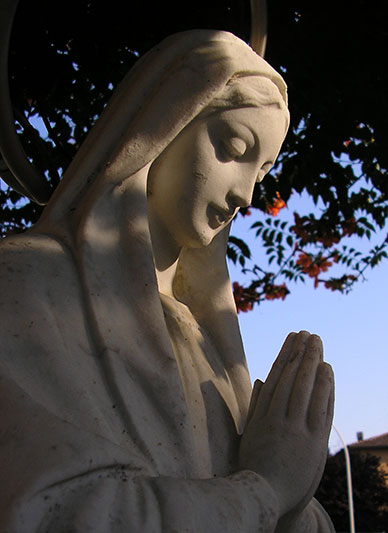 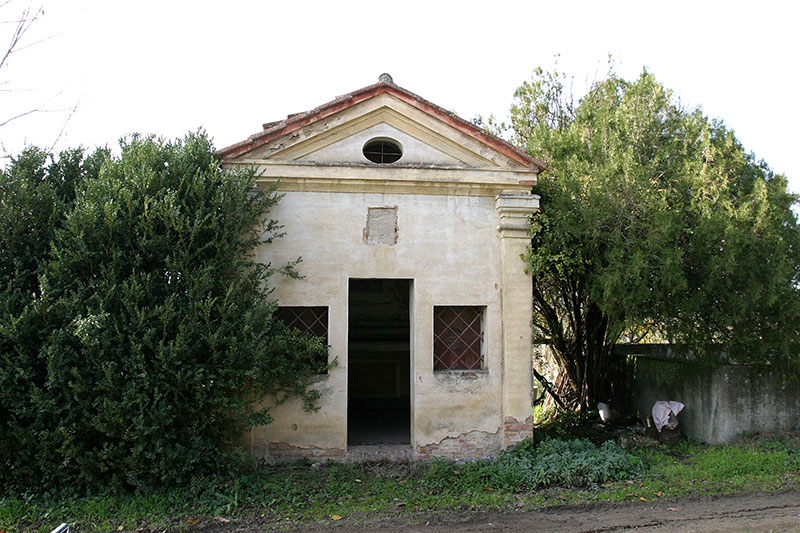 The chapel is already reported as "Il Madonnino" in a topographic map of 1644.

SCULPTURES ALONG THE VIA FRANCIGENA